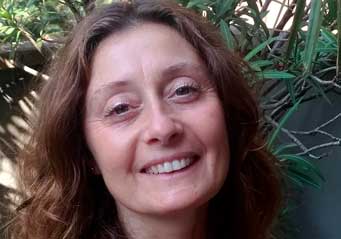 After graduating from high school with a fashion stylist diploma, Manuela worked in insurance for several years and later at Elopak SpA, a multinational that produces cartons for liquids.

In 2015 she decided to change and took a yoga training course. After qualifying as a yoga teacher for adults and children, she went on to specialize in antenatal yoga and yoga for the elderly.

In 2018 she opened a yoga center with the Shanta Pani Italia Federation, but unfortunately was forced to close it in 2020 due to the pandemic.

Manuela refused to give up, however, and continued her studies, obtaining a diploma as an ayurvedic practitioner.

She has a passion for drawing, painting and art, as well as for dressmaking, and has developed skills in many areas that she has used in her professional and personal life.

She joined Dotwords in 2021, where she is responsible for administration, accounting, and supplier relations.